Homestuck is an interactive experience which has even permeated past the internet and onto the streets. At the upcoming Supanova Popculture Convention, there will undoubtedly be colorful red and orange horns, found atop the heads of Homestuck’s alien race, the Trolls. Fans have also created a plethora of unofficial works, including fanfiction, fanart, and cosplay ensembles based on the characters. Supanova, held at RNA showgrounds twice a year, is a highlight for people known as ‘cosplayers’, a phrase which is a combination of ‘costume play’. The fad originally began at Japanese anime and manga conventions, but have quickly spread through out the rest of the world. The idea of dressing up as a character for a day, and the immense amount of skill and dedication put into the outfits, is something which sets cosplayers apart from more casual fans. Below are a few examples of costumes, and the intense work and effort that goes into them! 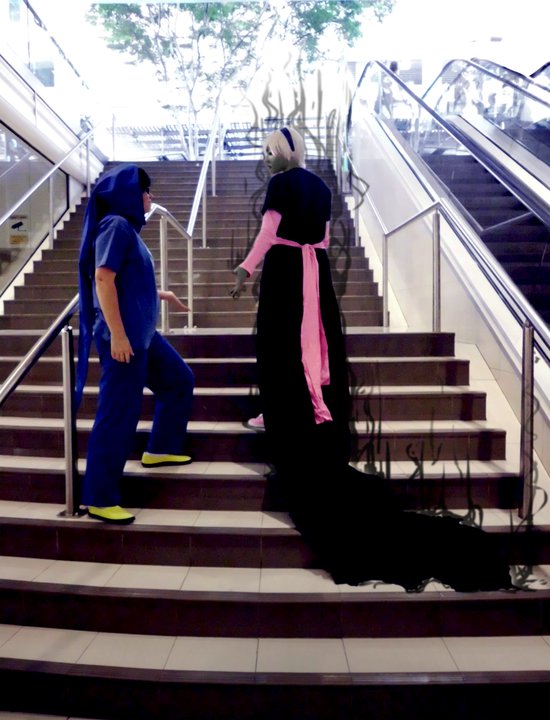 (Mr Kitty as Jake English, from Act 6 of Homestuck)

(The Ancestors from Homestuck, from left to right: The Summoner, The Disciple, Her Imperial Condescension, The Grand Highblood, The Expatriot Darkleer, The Marquise Spinneret Mindfang, The Neophyte Redglare, The Handmaid, The Dolorossa, and the two infront are The Signless and The Psiiconic)

Name: Saro
Country: USA
Age: 19
Quote: I love Homestuck, and cosplay especially, because it makes it easy to find people with things in common with you. I’ve always been really, really weird to a lot of people and it wasn’t until I went to college and discovered Homestuck that I realized that there were actually people like me out in the world. Also since I’m normally pretty shy, being able to assume the identity of a character and communicate with people first from behind that sort of safeguard makes it a lot easier to initiate conversation.